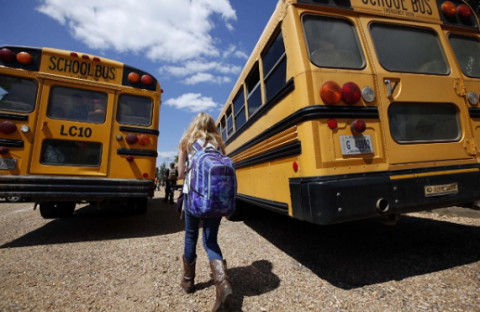 (WPR)---A strong economy means a shortage of school bus drivers. And during this first week of school, students, parents and teachers in Racine are taking the brunt of it.

Racine Unified School District principals were sent an email Thursday morning by the superintendent telling them to expect students to be at least 30 minutes late.

This has been the pattern so far this week. Students have been even getting home later, as several bus drivers are driving two routes in the morning and at night.

Stacey Lamers said her daughter, Londyn, has been late to middle school every day this week.

Getting Londyn home has been more difficult. School gets out at 3:41 p.m. but her mom said Londyn has been getting home after 5 p.m. because the driver does a different route first.

Stacey said the most frustrating part has been the lack of communication.

"I’ve tried to call multiple times to the RUSD transportation department, the bus company and I never receive a call back," Lamers said. "There is no communication, ever."

Racine Unified began contracting with Cincinnati-based First Student this year to manage and operate all student transportation for the next five years.

More than 11,000 students in RUSD ride the bus on a fleet of 155 buses, according to a press release the company issued when it was selected by the district.

Chris Kemper, a spokesman for First Student, said he knows parents and teachers are frustrated and the company is working on solving the problem.

"We know these first few days of service is not what the community expects," Kemper said. "Nor is it what we expect of ourselves. We understand their frustration and we are frustrated too."

Kemper said about 30 drivers who the company was planning on for Racine didn't come back after the summer.

First Student is getting about five to six applicants a day and offering drivers a $1,500 sign-on bonus. The company is also paying for drivers to get their commercial drivers’ license, Kemper said.

Districts across the state have struggled with a bus driver shortage. During an interview last month with Wisconsin Public Radio, Cherie Hime, executive director of the Wisconsin School Bus Association, said some districts have had to cut service or combine routes due to a lack of drivers.

Kemper said the issue is even affecting Canada.

"As you are driving down the road, you’ll see signs across the continent saying 'Now hiring truck drivers,' or 'Now hiring all drivers,'" Kemper said. "It’s an issue with not having enough drivers with CDLs (commercial drivers licenses)."