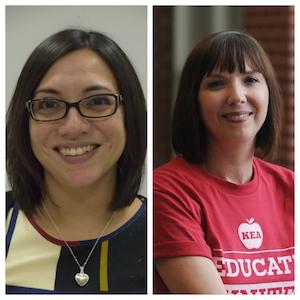 (WGTD)---The unions that represent public school teachers in both the Kenosha and Racine unified school districts still enjoy strong support from the teachers. Support from within the community is harder to gauge.

The leaders of both associations spoke recently on Education Matters. Tanya Kitts-Lewinski is President of the Kenosha Education Association. Angelina Cruz heads up Racine Educators United.

Cruz said recent campaigns undertaken to hurt public employee unions in recent years have taken a toll. "The perception of unions has dramtically shifted post-Act 10," Cruz said. "I think in many ways we have been characterized and painted in a really poor light. What I don't think people understand is when we talk about educator unions--they're comprised of educators. You cannot separate one from the other."

Kitts-Lewinski of the K-E-A:  "I think overall in Kenosha regardless of the legislature and what they've done with Act 10, I feel that the vast majority do support public education and definitely support teachers and want to take action on their behalf," she said.

Last fall in Racine, only 14 teachers voted against union representation while the number in Kenosha was 25, according to Wisconsin Employment Relations numbers.

The recertification rules are stacked against the unions.  A ‘non’ vote among those eligible to vote counts as a vote against representation.

Even still, in Racine, 81% of eligible votes went in favor of representation. In Kenosha, where contact between the union and eligible-to-vote employees is more restrictive, the percentage was 60.

Kitts-Lewinski says she's optimistic that relations between the union and the district will improve. For one thing, the union has offered to pay for part of Kitts-Lewinski's salary to allow her to work half-time on union matters with access to school buildings, according to Kitts-Lewinski. Up until Act 10, the district allowed the KEA president full-time release.

Kitts-Lewinski says she believes the union can play an important supporting role for the district, especially in the areas of educator input and retention and problem-solving.

In an email, district communications chief Tanya Ruder wrote: "The district continues to work with the KEA via meet and confer sessions, annual base wage negotiations and other areas of interest."

“The Show Must Go Online!” with the Racine Children’s Theatre

From the Racine Theater... Read More