Full House For a Summit Aimed At Kick-Starting Housing Developments 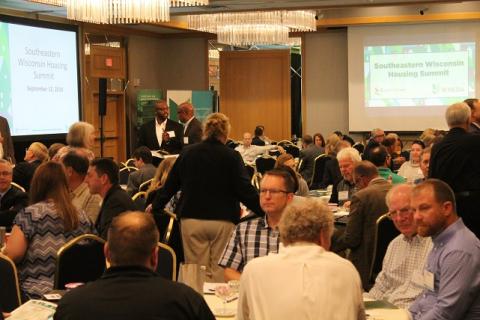 In a bid to meet the demand for housing and plan for orderly development, Racine County and the Wisconsin Housing and Economic Development Authority hosted a nearly day-long meeting Wednesday for developers, bankers, and municipalities.

Jerry Franke helped to develop Lakeview Corp. Park in Pleasant Prairie and is retired from his last job as WisPark president. He’s now serving as a consultant for Racine County, assigned the task of facilitating housing development, and making sure that as much of it as possible takes place within the county. "You spend most of your disposable income in the communities in which you live and work," Franke said. "So if those people are living here they'll be spending more money here and that'll generate growth for our businesses," he said.

In addition to creating favorable development conditions for both developers and municipalities, Franke is trying to limit urban sprawl by identifying tracts of land that are already serviced by city sewer and water.

With land prices already rising, developers may be a bit skittish about taking the risk. Franke says all it takes is one. "The real estate business has a herd mentality, he said. "I think when we get that catalytic project that we're looking for then that'll open the door."

Franke said he was pleased with the attendance for Wednesday's event. Over 200 people showed up at the Marriott in Racine.

New Options For Kenosha Residents to Participate in Listening Sessions

From the City of Kenosha: ... Read More