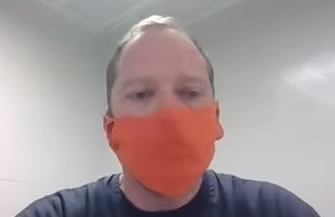 (WGTD)---An Illinois cop was arrested for suspected drunk driving in Pleasant Prairie over the weekend. The traffic stop by village police on Green Bay Rd. was far from smooth.

According to a criminal complaint, 39-year-old Lucian Tessmann was cooperative at first, apologizing for speeding and admitting that he had “too much” to drink.

Things started to turn sour after the Kenosha resident did poorly while performing standard field sobriety tests, according to the complaint.

When informed that a blood draw would be requested, Tessman purportedly started screaming, asking “what kind of officers would arrest another officer.”

Tessmann then reportedly complained that he couldn’t breathe, and compared himself to George Floyd, the Minneapolis man who died in police custody after an officer knelt on his neck for nine minutes.

At the hospital for the blood draw which was refused, Tessmann purportedly, took off his mask and coughed loudly, saying that he didn’t mean to get everyone sick.

In court Monday, Tessmann was formally charged with drunk driving, 2nd offense, and possession of a firearm while intoxicated. A loaded gun, believed to be Tessmann’s service weapon, was found in the middle console of his vehicle. A preliminary breath test revealed a blood-alcohol content of .18. That’s over twice the legal limit.

According to records, Tessmann was convicted of drunk driving in 2016 after a Wisconsin state trooper reportedly pulled him over after clocking him on radar at 100 m.p.h.

Tessmann apparently is employed by the Park City, Illinois police department. A city worker confirmed that a Lucian Tessmann is on the payroll there. Park City is located between Waukegan and Gurnee.