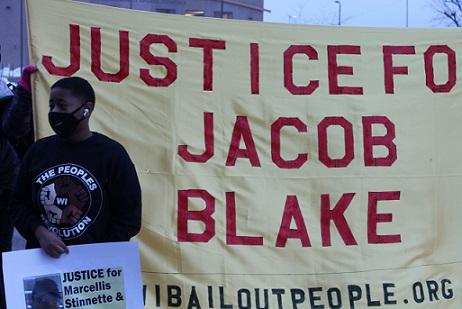 (WGTD)---A demonstration to try to pressure Kenosha city officials into firing the police officer who shot Jacob Blake in the back and side is expected to be held Monday afternoon.

Sponsored by the Blake family-founded organization, "Leaders of Kenosha", the event is expected to be held at the Kenosha Municipal Building beginning at 4 p.m.

The police department is conducting an internal investigation into the actions of Rusten Sheskey. The Police and Fire Commission has ultimate authority in the matter.

Kenosha County District Attorney Michael Graveley cleared Sheskey of any criminal charges last week. During a two-hour-long presentation, neither Graveley, or county-hired, use-of-force expert Noble Wray, had any outward criticism of Sheskey or the other two officers who were on the domestic violence call.

Wray was asked if anything could've been done differently. "I ask that question over and over again," Wray said. "I would've hoped there may have been an opportunity for dialogue," he said. "If you build a rapport with someone, maybe you can talk them down. But in this particular case it happened so fast."

Sheskey wound up rolling on the ground with Blake. Three separate attempts to "taze" Blake, who was armed with a knife, had no impact. The shots were fired after it appeared Blake was going to drive off with his children in the back.

Continuing to respond to the original question, Wray said better training is something that's always in order.

Also, police need to develop better strategies for dealing with such situations, he said. "We had an adult man that was shot in the back 7 times. No society should ever accept that."

The family is expected to take some legal action.