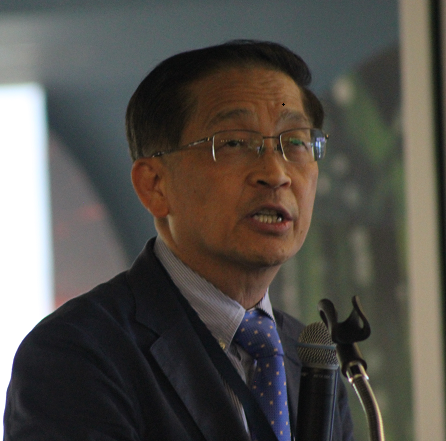 (WGTD)---There's a new Foxconn executive in charge of developing the company's business park in Mt. Pleasant.

According to a report in the Journal Times, Jay Lee is replacing Louis Woo, who is stepping down to address undisclosed personal matters.

Woo had made a number of public appearances in the area, and was a familiar face to anyone who followed Foxconn's progress in Mt. Pleasant. He carried the title of project director and special assistant to Foxconn founder and former chairman Terry Gou, who stepped down from the day-to-day operations at Foxconn earlier this year to make what would turn out to be an unsuccessful run for Taiwan's presidency.

In a statement to the Journal Times, Foxconn confirmed that Lee will now lead the Mt. Pleasant project.

Lee currently serves on Foxconn's board of directors as deputy chairman. He's also on the faculty at the University of Cincinnati where he specializes in artificial intelligence.

Lee made his first public appearance in the Racine area last June when he spoke at a conference at Gateway Technical College.

Lee announced that the company is planning on establishing a center in Mt. Pleasant devoted to training workers on matters relating to artificial intelligence as it pertains to manufacturing.

At the time, Lee was introduced as Foxconn's Senior Vice-Chairman of Industrial Internet.

He told the Racine audience in June that the key to the future is having enough workers who are skilled in artificial intelligence concepts. But those workers, he said, are few and far between. "Today you cannot find an I-A Person. Even if you find them you cannot afford them. Even if you can afford them, you cannot keep them because they get bored."

The company did not make Lee available to reporters following his speech.