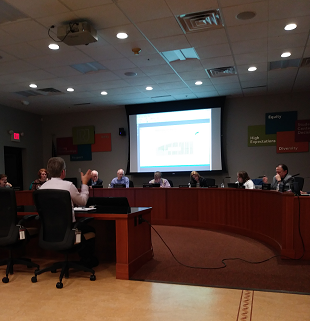 (WGTD)---Racine School Board members Monday night stood by the long-range, facilities funding proposal that they voted to put on the April ballot just last week.

Board President Brian O'Connell conceded that the 30-year-long funding plan carries with it sticker shock. "Obviously the billion dollar number is a big number," O'Connell said. "But that number is not in some ways new cash out of a person's pocket."

Meeting in work session mode, the board discussed the wording for a policy resolution that would commit the district to a level of  borrowing that would result in a stable tax rate for debt service purposes.

The facilities plan closes some schools, builds new ones and remodels others. It costs nearly $600 million plus interest, boosting the total cost to $1 billion.

On the operational side, the plan is expected to result in lower costs in part because the district would have five fewer elementary schools.

O'Connell said the referendum proposal includes a cushion and in some ways overstates the plan's true cost. In order to maintain tax rate stability, future boards would have the option of shifting gears and borrowing less or re-directing capital dollars when unexpected needs rise.

The tax rate for debt payback purposes would initially remain stable because new borrowing would only be undertaken as previous bonds were paid off. District officials also assume there'll be gradual growth in the tax base.

Board member Mike Frontier praised the staff that came up with the facilities plan. "It's complex," Frontier conceded. "If we can get the story out I think it can be embrased by the community," he said.,

(WGTD)---Dislocated workers who are... Read More