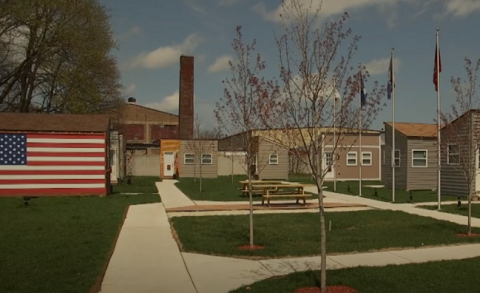 The director of a new non-profit that built a community of 15 tiny homes for homeless veterans in Racine says his agency is committed to expanding the concept.

Speaking on a recent edition of Community Matters, Jeff Gustin said the agency is close to announcing a second site.

Gustin, executive director of Veterans Outreach of Wisconsin, couldn’t disclose the exact location because details such as zoning were still being worked out. But he said the new village would be somewhere in the southeast corner of the state.

Gustin told program host Len Iaquinta that he’s convinced the tiny home concept with wrap around support services is the way to solve the homeless problem, in part because longer stays are permitted, enabling residents to acquire greater stability.

At the agency’s Racine location, the small homes have everything but a kitchen and a bathroom. Those facilities, along with a dining room and other support services, are located in a community center, encouraging regular interaction between residents, and residents and staff.

All 15 tiny homes at the James A. Petersen Veterans Village are occupied.