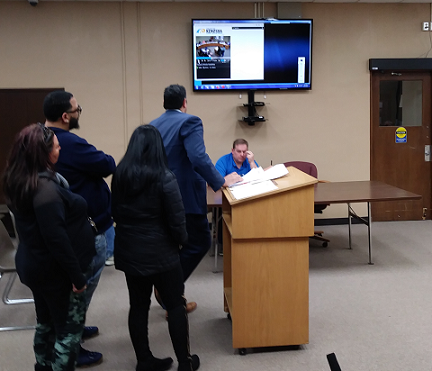 A Kenosha bar that features a D-J playing hip-hop music on weekends may lose its cabaret license because of an excessive number of police calls to the bar and surrounding residential neighborhood.

The city’s License and Permit Committee voted unanimously Monday night to recommend the move, prompting the bar manager to accuse the committee of racism.

Initially, operators of the Red Zone Sports Bar and Grill in the 48-hundred block of Sheridan Road told aldermen last summer that they wanted the cabaret license to host bands that would play country and rock music. But the entertainment format evolved to hip-hop, attracting large crowds that at times spilled out of the bar and into the neighborhood, causing numerous problems.

Fights, drug and alcohol use, noise, littering and even occasional gunplay drew police on a regular basis in recent weeks. "I have residents over there that are scared," said John Fox, the alderman of the area. Bullets have lodged into walls of at least one home. No one has been injured.

In the bar’s defense, attorney and former alderman Anthony Nudo pointed out that the establishment itself has yet to be cited for anything improper, and has been working with the police department to mitigate the issues.

But committee chair Curt Wilson, in an exchange with bar manager Duvall Coates, argued that the tavern has fallen short of expectations.

When asked to explain why the Red Zone has so many problems that attract the attention of police while other taverns don't, Coates responded by saying it's a "minority tavern."

"Oh don't give me that," Wilson said.

In addition to recommending that the full council pull the bar’s cabaret license, the committee voted to schedule a closed-door meeting to come up with a list of steps the bar must take to stay in business.