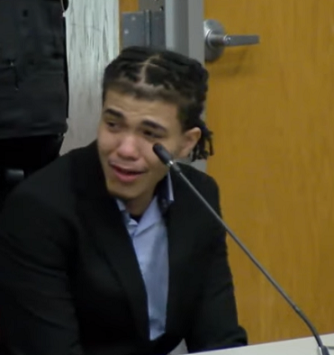 (WGTD)---For nearly the entire duration of his five-day trial, Martice Fuller, dressed in a blazer, seemed to sit calmly at the defense table while dozens of witnesses helped prosecutors make the case that Fuller fatally shot his ex-girlfriend and wounded her mother following a bad break-up. Any emotion was hidden behind the mandatory mask.

But following the jury's return of across-the-board guilty verdicts Friday afternoon, Fuller ripped the mask off and started crying uncontrollably. "I'm sorry," Fuller said through the tears to friends and family still in the courtroom. He said other things but the WGTD cameras, which streamed the entire trial live, couldn't pick up those comments.

The jury, the Juga family contingent and prosecutors had already left.

Fuller's relatives and supporters waited in the courtroom to speak to defense attorneys. Fuller stood up and, still crying, was led out of the courtroom by deputies.

The jury had deliberated less than three hours. Sentencing was scheduled for May 21st. Fuller will get the mandatory life in prison plus time for the attempted murder and the armed burglary charge. The judge could set a parole eligibility date on the murder charge.

The all but iron-clad case against Fuller--accused of shooting ex-girlfriend Kaylie Juga and wounding her mother, Stephanie-- went to the jury at 12:30 Friday afternoon, although the first order of business may have been lunch.

In a nearly 90-minute closing statement Friday morning, Kenosha County District Attorney Michael Graveley argued that it would be unreasonable to explain away the large mass of evidence against Martice Fuller as just a set of unlucky circumstances for the defendant.

Graveley said the relationship between Martice and Kaylie could be defined through the prism of domestic violence, and that Fuller’s main concern was all about controlling Kaylie’s behavior. "He knows no limits," Graveley said. "No authority is going to stop him," he said.

Graveley cited numerous examples, including an appalling case of Fuller trying to intimidate the head disciplinarian at Bradford High School in January of 2019, just a few months before the shootings. Former assistant principal Jill Schwenzen testified Thursday that Fuller, upset with a no-contact order, called Schwenzen a liar and stuck his finger in her face during a discussion. On another occasion, Schwenzen said she had to hang up on the cocky Fuller. Schwenzen said she was scared not only for Kaylie but also for herself.

Fuller and Juga met while both were in their freshmen year at Bradford. By their sophomore year, Kaylie was starting to tell her mother about Fuller’s signs of possessive behavior. Things spiraled downward and in the spring, Kaylie tried to break up with Martice after a series of aggressive incidents.

Graveley, his voice shaking with emotion, reminded the jury that Kaylie would’ve graduated this spring. "She'd be in that spectacular set of moments where she'd be thinking about jobs and colleges," Graveley said. "It was all about to happen," he said.

"She was at the very start of those beginning chapters of adult life..and like the early part of so many life stories, she met somebody. She met a boy. And sometimes that's the brilliant beginning of life's stories. For her, it was the end."

Defense Attorney Carl Johnson, in his 25-minute-long statement, futilely argued that there were too many holes in the prosecution’s case, and that Mrs. Juga, who was shot at point blank range but survived, was somehow mistaken in identifying Fuller as the gunman.

He urged the jury to keep an open mind. "Your job is to evaluate the evidence, to look at the evidence, but not to be swayed by sympathy, prejudice or passion," Johnson said.

Testimony ended Thursday without the defense presenting any witnesses.

The entire trial and the verdict is available--for a limited time only--on WGTD's YouTube channel.