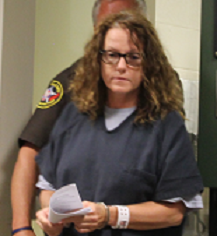 Donna Matthews may not have been alone.

According to her attorneys, at least two other women suffered abuse at the hands of Michael Gayan before Matthews entered the picture.

Matthews now faces a charge of 1st Degree Intentional Homicide for shooting Gayan at his lakefront home during the July 4th, 2016 fireworks display.

Her attorneys are trying to get a judge to allow them to claim self defense by invoking Battered Women's Syndrome.

A motions hearing is to resume on Wednesday. The trial is scheduled for June.

In court filings, Matthews' attorneys say Gayan had a history of terrorizing women.

At least one will testify. "She suffered death threats, beatings, shaming, stalking, tracking and other aberrant and violent contact similar to the menacing behavior to which Gayan subjected Matthews," they wrote.

Matthews' attorneys say their client "felt compelled" to return to Kenosha--she'd been living in Hawaii--and kill Gayan. "She was convinced, based on his constant and threatening words and terrifying conduct against her and her knowledge of similar conduct against former girlfriends, that she or her daughter would suffer grave harm or death at his hands at any time," according to one of the court filings.

Among the pre-trial issues to be decided by Judge Jodi Meier is whether to allow an expert hired by the state to examine Matthews.