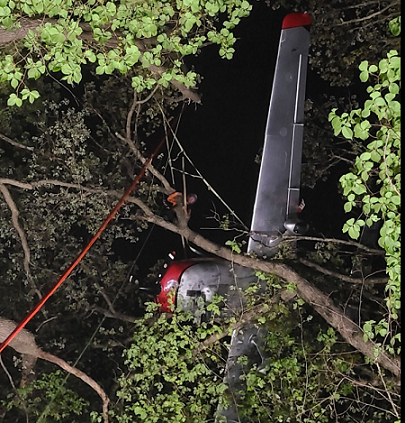 Editor's note: Our original story is being reposted with this link to photos, courtesy of the Whitewater Fire Dept.

(WGTD)---A dare-devil rescue was performed by firefighters from southern Wisconsin after a small plane crashed into treetops in the Kettle Moraine State Forest near Whitewater Saturday evening. The three men inside--uninjured--were hung up in the wreckage for hours until they could be lowered to the ground in a harness.

The rescue effort was led by technical rescue teams from the Madison and Janesville fire departments, with plenty of assistance from local fire departments and law enforcement personnel, according to Janesville Fire Dept. Battalion Chief Ryan Murphy.

The plane apparently encountered mechanical problems with its engine as it was flying over the area. The pilot had time to deploy a parachute that was attached to the plane, and the craft made a soft landing between 65 and 75 ft. above ground in dense woods about 400 yards from the nearest road, Murphy said. Rescuers were able to use UTV's to drive about three-quarters of the distance, but then had to traverse the rest of the way on foot.

The rescue effort began with an arborist climbing up and rigging a rope system attached to a harness. A Janesville firefighter climbed up to help the men get into the harness one-by-one for the trip to the ground. The rescue was completed around 2 a.m.

The men were able to walk away from the crash site after being evaluated by emergency medical technicians.

"It was our pleasure to assist the Whitewater Fire Dept. in getting these individuals down," Murphy said. "We were happy with the outcome and everybody was safe and uninjured," he said.

According to a news release from the Whitewater Fire Dept., the men were on their way from Sheboygan to Burlington.