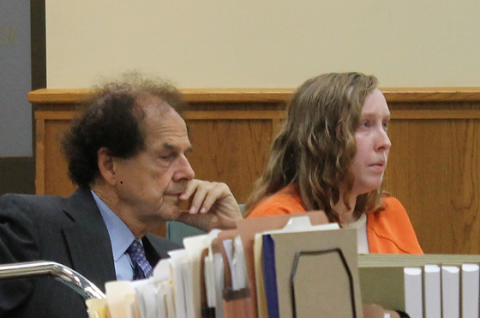 (WGTD)---On the surface at least, 30 year-old Anna Wright of Twin Lakes seemed to have everything going for her: Bachelor and master’s degrees, and well-paying jobs in the pharmaceutical industry.

But she also had a severe drug addiction that indirectly led to a terrible mistake. She unintentionally ran over and killed her boyfriend last year after a night of drugs.

In court Thursday,  Wright was given a seven-year prison term by Judge Mary Wagner who wondered out loud how such a thing could occur. "When a person is well-educated and has access to treatment and services when they have a full-time job with Baxter...there was certainly time to address the harrowing issues of drug abuse," Wagner said at Wright's sentencing hearing.

According to statements made in court, Wright was a frequent user of heroin, cocaine and crack cocaine.

The victim—Brian Engelhart—was struck and killed after the pair argued over drugs in April of 2017.

In court Thursday, Judge Wagner commended Wright for her resolve and apparent sincerity in working to kick her addictions while in jail awaiting the resolution of her court case. But Wagner also said Wright did not deserve simply probation.

Wright’s seven year-long prison sentence will be reduced by the 487 days she's already spent in jail since the accident.

Wagner's decision to impose additional time behind bars went against the recommendations of both the defense and prosecution.

In court for the sentencing was Engelhart's young son who appeared to be in his teens. As Wright was addressing the judge, the boy yelled a profanity and was quickly led out of the courtroom. Judge Wagner remarked later that the collateral damage of Wright's actions now include an anger-filled boy who'll be affected for years by the premature death of his father.