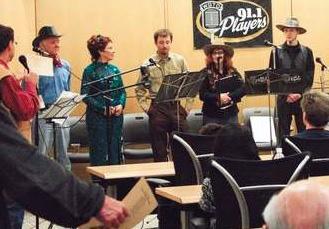 The WGTD Radio Theater offers live broadcasts of original dramas and comedies that are performed by the 91.1 Players. Productions are staged roughly every sixth Saturday in the 11:15 time slot that’s normally occupied by Community Matters. The series is produced by Dr. Steve Brown. To contact Steve, call 262-813-0144.

Steve has also been a high school teacher, principal, and district-level administrator. He was a tenured full professor at Northeastern Illinois University from 1989-2012. He also served as program coordinator of the Educational Leadership program for 8 years and 2 years as Department Chair. In addition, Steve also served as Special Assistant to the University President for 2 years His teaching areas include graduate educational leadership courses in the M.A. programs

Steve was also an Associate Professor for 4 years at the University of Wisconsin Oshkosh. Since 2016, Steve is an elected member of the Salem School Board.

He is also the co-founder, of the 30-time award winning WGTD Public Radio Theater, now in its 18th season.

The WGTD Radio Theater: “MARS: Inside and Out”

A Re-broadcast of The WGTD Radio Theater

RP: The WGTD Radio Theater: ReBroadcast of " A Branson Christmas."

A re-broadcast of "A Branson Christmas." The WGTD Radio Theater

The WGTD Radio Theater will present “A Branson Family Christmas." This re- broadcast, by the 91.1 Players.