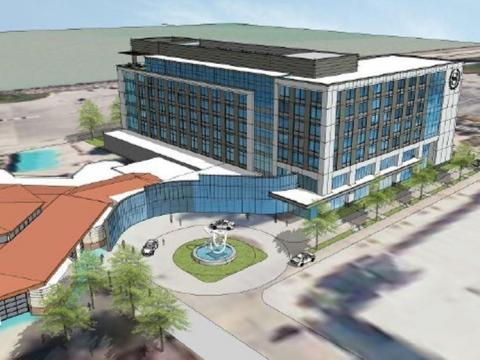 (WGTD)---A $48 million dollar, 173-room hotel----with expanded conference space--- is being planned at the Festival Hall site in downtown Racine. At a Friday morning press conference---Mayor Cory Mason and David-Elias Ratchie from Gatehouse Capital announced details of the new hotel development---which is dependent now on the State Legislature enacting some enabling legislation. Mayor Mason said state lawmakers have to sign off on the project because it falls on land that had long ago been reclaimed from Lake Michigan---and---is subject to some specific state rules.

The hotel would be a Sheraton and it would feature a rooftop restaurant---and---according to the developer---something else for the general public to enjoy---an observation deck that would be open free to the public during business hours. Ratchie said the conference center would be big enough for conventions of up-to-2,000 people---but---would also contain space for wedding receptions. Mayor Mason said the hotel would be built in the current Festival Hall parking lot---and---will be connected to that facility.

This project comes on the heels of last month’s announcement of a $40 million dollar project on Lake Avenue---near the city’s Lake Michigan harbor---which would include a 100-room hotel and 190 residential units. Gatehouse Capital has been developing hotels since 1997 partnering with---among others---Starwood, Marriott and Hilton.