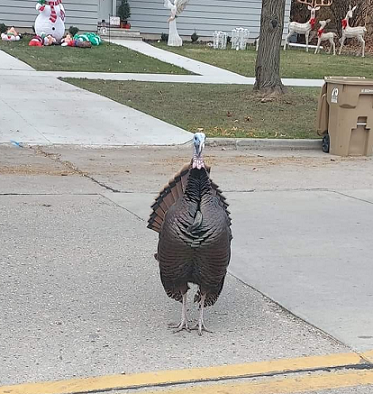 (WGTD)---It appears that the wild turkey that’s taken up residence in Kenosha’s Forest Park neighborhood survived Thanksgiving—and attempts earlier in the week to relocate him to a safer location.

Jack Rose represents the area on the city council and lives in the neighborhood where the turkey--christened Carl—spends most of his time.

Attempts by Walworth County-based Fellow Mortals to capture Carl and take him to a safer haven didn’t sit well with some residents who are fascinated by the bird and his antics as he mixes at times with traffic and onlookers. Carl was photographed a few days ago perched on top of a Kenosha Police Dept. squad car. Carl--by the way-- eluded those potential captors.

Rose realizes there’s a chance things may not end well for Carl, but at the moment, he’s willing to sit back and let nature take its course. "Let Carl be," Rose says. "He's a diversion. He makes people smile. And we really need that in these days. We really do," he says.

"He may take on the wrong bus. Or the wrong construction truck. I don't know. He's been very fortunate. Sometimes he's rather bold."

Kenosha police, for now, are taking a laissez faire approach, even though turkeys at times are known to become aggressive.

Carl has his own Facebook page where some of his movements are documented and photos posted.