From Crime Victim to Murder Suspect 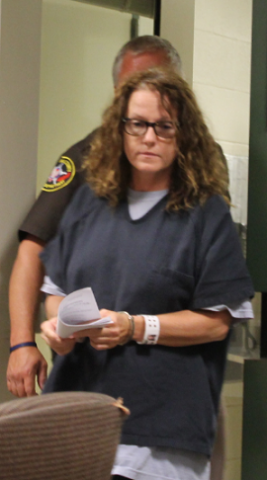 Kenosha---Normally, police and prosecutors would be strong allies of a woman who’s been abused. But in Donna Matthews’ case, Kenosha Police and the Kenosha County District Attorney’s office are out to lock her up for life.

The 50 year-old Matthews is charged with 1st Degree Intentional Homicide for taking matters into her own hands last summer and killing 51 year-old Michael Gayan, a former boyfriend who over many months energetically used an array of resources to harass her both in person and online.

If the schedule holds, the Matthews case, along with that of her brother who allegedly was in on the planning, will begin at the end of next month. A pretrial proceeding to deal with motions is scheduled for Thursday morning.

An examination of the thick court file reveals that Donna Matthews, while living in Hawaii, had numerous contacts with Kenosha police in the months before she traveled to Kenosha to allegedly shoot Gayan in his own home.

Matthews had moved to Hawaii about a year ago to purportedly escape Gayan’s reach. But Gayan moved in next to her just days after she arrived. The source of his funds is unclear.

Details are fuzzy, but Gayan apparently left the islands and moved back to the Kenosha area after Matthews, a bartender, secured a restraining order against him.

Despite the distance, Matthews was still fearful of Gayan and wanted Kenosha police to arrest him for making threats against her family, and for harassing her via emails, text messages and phone calls. He also posted sexually explicit photos of her online.

“Michael never stops, I can’t get away from him, his threats are real,” Matthews said in an email to Kenosha Police Dept. Sgt. Dan Cooper last spring. Matthews claimed that Gayan had connections to the Chicago mob.

But a KPD detective who was assigned to the case decided, after consulting with the D-A's office, that an arrest wasn’t warranted. For reasons that appear hazy, the restraining order that had been issued against Gayan in Hawaii never made it onto a national crime database.

The matter was dropped, and a frustrated Matthews allegedly started making plans.

Matthews purportedly got some financial assistance from an unlikely source: Gayan himself. He reportedly paid for her plane ticket home after she feigned an interest in rekindling their romance, according to court records.