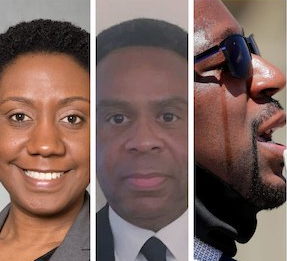 (WGTD)---A circuit court judge, a public defender and a former prosecutor-turned private practice attorney are convinced there’s a double standard in the criminal justice system: One set of rules for whites, and another, more restrictive set for everyone else to follow.

“When they make that statement ‘why don’t we just follow the rules’---we are following the rules,” said Judge Childs. “We’re frustrated with what the rules are.”

Kenosha attorney Cunningham, who once worked as a Milwaukee County prosecutor, says she believes the cards are stacked against minorities from the start. “Officers---when they approach African-Americans---they approach with the assumption that the person they pulled over has done something. Or they’re going to be violent or they’re dangerous,” Cunningham said. “And when you have that mindset, your whole way of how you interact with that individual is going to be different,” she said.

Darren Crawford, the Racine public defender, can attest to Cunningham’s point. Crawford was recently back in his hometown of Detroit, working as an Uber driver to earn some extra money, when he found himself in an unfamiliar part of town. He mistakenly turned right on a no-turn-on-red sign. Crawford was pulled over. The officer approached his car with his gun drawn. “To be sure, he was scared of me and I don’t know why,” Crawford said. “I could see him when he pulled his weapon—I could see him shaking a bit which made me even more nervous.”

The officer relaxed after seeing Crawford’s passenger sitting in the back—the passenger was white.

Bias in the criminal justice system extends beyond individuals, says Judge Childs. “You may have individuals who are authentic and not biased but the system itself is biased,” he said.

Childs says it seems to be easier for minorities to get caught up in the system, and once they’re there, it’s hard to get out. He cites criminal justice diversion programs that sometimes don’t accept anyone with a record.

(WGTD)---Residents of a Kenosha... Read More