Kenosha County Board Meetings to Go All Virtual 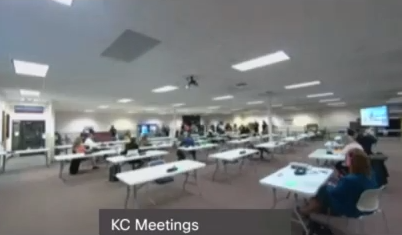 (WGTD)---Because of COVID, the Kenosha County Board will meet virtually for the first time Tuesday night. The board voted 14-2  last week to take the leap.

While many other governmental bodies in the area made the transition months ago, a number of Kenosha County supervisors balked at the idea. As an alternative, the board switched its meeting location from the county board chambers in the courthouse to a much larger space at the Kenosha County Job Center.

Since then, virus cases have surged, one or two supervisors have contracted COVID and a half-dozen board members continue to steadfastly refuse to wear masks at meetings.

Switching to virtual means that sending a written message will be the only way for members of the public to provide input at meetings.

That's why Supervisor Jeff Gentz voted against the transition. Gentz said he believed citizens' inability to speak at Kenosha City Council meetings because they're virtual has led to an increase in citizen comments at county board meetings. "It's to our credit that a lot of these people who have issues with the city have been coming here and hammering us," Gentz said. "And that's fine. But we're at least here to be hammered and I think we should continue to do that."

Long-time supervisor Ron Frederick supported the transition. "So I have to jeopardize my health because 5 or 6 wont' wear a mask?" Frederick asked.

One board member reportedly contracted COVID recently, although Gentz said he suspected the individual's failure to show at Thursday's meeting was a dodge so as to avoid having to cast a controversial vote.

Board Chairman John O'Day said Saturday he had no confirmation that a board member had recently contracted the disease.