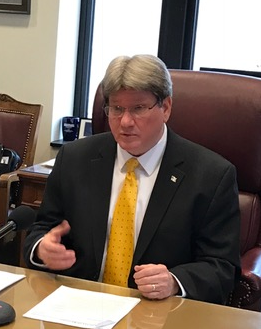 (WGTD)---Kenosha County Executive Jim Kreuser has made an endorsement in the race to choose his successor.

In taping this Saturday’s Community Matters program on WGTD, Kreuser indicated he’s solidly behind Kenosha Clerk of Courts Rebecca Matoska-Mentink. “She announced right away. She has the experience. Becky knows the job,” Kreuser told host Len Iaquinta. “She’ll do a solid job. The other two candidates are good people. I don’t know a lot of their backgrounds or details. From the business aspect of county government, they haven’t been really close to it,” he said.

The other candidates in the Feb. 15th primary are State Representative Samantha Kerkman and County Board Supervisor Jerry Gulley.

In the interview, Kreuser said it’s particularly important for the next county executive to have a strong understanding of county finances, and be willing to accept input from county department heads. “We have a lot of great professionals within county government,” he said.

Kreuser also suggested that the person needs to have a vision, move aggressively at times yet be deliberative and collaborative. “County government is like an ocean liner,” Kreuser said. “If you treat it like a jet ski, you’re going to be in trouble. If you think you can move from right to left and make some cute maneuvers here and there, it’ll catch up to you.”

Kreuser has been Kenosha County Executive since 2008. He declined to seek re-election to a new term.

Both Kerkman and the Gulley campaign declined to comment on the endorsement.

The complete program will air Saturday at 11:15 and then be available in the archive.