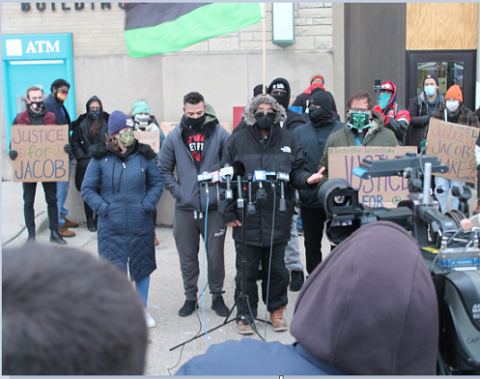 (WGTD)----Just hours after the National Guard left Kenosha and 'the fence' came down, several dozen supporters of Jacob Blake held a peaceful demonstration at the Kenosha Municipal Building.

Blake's uncle, Justin Blake, spoke to reporters, then led a march around the building in an effort to pressure city officials to fire Rusten Sheskey, the officer who shot Jacob Blake in the back and side several times during a domestic dispute last summer. "Believe what your eyes told you," Justin Blake said in reference to the infamous bystander's cell phone video of the shooting. "This was nothing more than a modern-day lynching," he said.

Last week Kenosha County District Attorney Michael Graveley announced that no charges would be filed against Sheskey, indicating that his actions were not unreasonable, given the circumstances. At last report, a police department internal investigation that will have a bearing on Sheskey's future with the department was still underway.

Meanwhile, the Guard announced Monday that the 500 troops that had been mobilized to supplement local law enforcement ended its mission over the weekend.

The troops were in place in advance of Graveley's announcement in a bid to help ward off any violent reaction. None occurred.

The fence around the courthouse and public safety building was removed Monday, along with barricades that had limited access to the area.