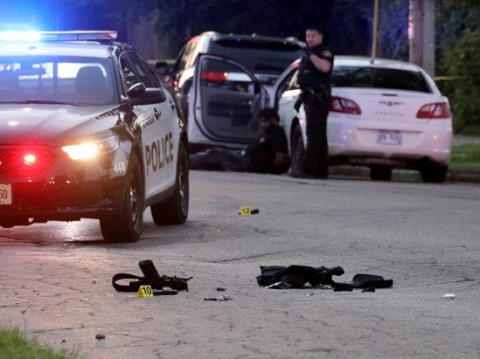 (WGTD)---A gunshot wound suffered Saturday morning by a Kenosha police officer is not believed to be life-threatening, according to a news release.

Police were investigating an entry to a vehicle complaint in the 4600 blk. of Sheridan Rd. at about 4:30 a.m. An officer located a subject matching the description of the suspect.

As the officer who was shot attempted to investigate, the suspect produced a firearm and fired. Although the officer returned fire, it's not known whether the suspect was hit, according to the release.

The 30-year-old officer was taken by rescue squad to Froedtert-Pleasant Prairie. He's a two-year veteran of the force.

According to the fire department's scanner frequency, the officer was said to be conscious but in pain, with a gunshot wound to his abdomen just below his bullet-proof vest.

The shooter is still being sought. A description was not immediately provided.

The state Division of Criminal Investigation is now in charge of the investigation.

Although the theft complaint was taken on Sheridan Rd., the shooting apparently occurred  several blocks away and about a block north of the Boys & Girls Club. Some debris was spotted in the street.

According to scanner traffic, two people were pepper-sprayed at some point in the incident.