Plans For a Village Green Come Together in Pleasant Prairie 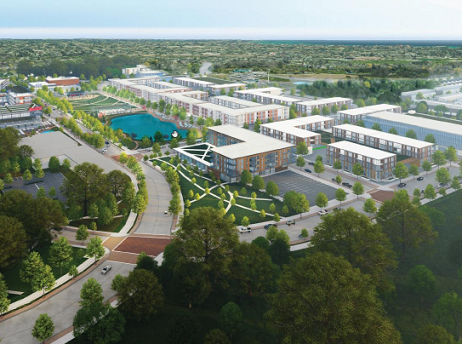 (WGTD)---A consultant hired to develop plans for a downtown built from scratch in Pleasant Prairie presented their ideas Thursday night. And as expected, the firm, called RINKA, created a cohesive blueprint  using many of the thoughts that were put forth last year by several citizen committees

Over 130 people participated in the virtual session.

The citizen-committee recommendations that were part of RINKA's plan included a village green at the heart of the development, surrounded by a public market, an amphitheater, a micro-brewery, an art gallery, other retail and restaurants,residential units, bike and pedestrian trails and plenty of green space. Images that were presented Thursday night included a pond with umbrella tables nearby, a pedestrian mall, streets that could easily be converted to pedestrian traffic and a housing development for seniors that included a library.

Driving the financial element of the project was the residential component. About 1,300 units are planned that could generate a population of around 3,200. Apartments and condos would be build in 3-4 story buidings above the retail, with densities thinning out from the epicenter of the 180-acre site, ending with a transition to single-family homes, to match the make-up of surrounding neighborhoods.

RINKA planner Steve Morales says density is crucial to attracting quality developers and making possible the public amenities. The challenge, he said, was to balance the need for density with the desire to include a strong 'green' element and to limit sprawl.

The site is located near village hall off of Highway 165.

Morales said potential developers have expressed a strong interest in the project.

The village is expected to have design guidelines in place by the end of the year, and pick a master developer by early next year.

The project is expected to be built in phases, with the first phase more than likely being the high-density residential and commercial piece that’s at the heart of the development.