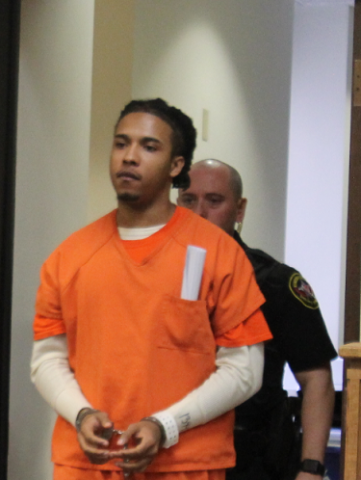 (WGTD)---One of the four defendants charged in connection with a drug-related shoot-out that claimed the life of a Salem Lakes man received a true life sentence Tuesday.

22-year-old Markeith Wilson was sentenced to life in prison without a chance for parole for the death of Joe Riley. Even though it was a moot point, Judge Jason Rossell tacked on another 20 years for the wounding of Eva Lofton, a friend of Riley's who survived nine gunshot wounds.

Riley, Lofton and two others were in Riley's home the night of Nov. 15th, 2018 when Wilson and another man, both armed, kicked in the door with the intention of stealing marijuana and cash. Two others waited outside.

Because he was robbed two weeks earlier, Riley was ready with his own firearm and an exchange of gunfire occurred.

Riley was pronounced dead at the scene. Wilson and the other man were both wounded, but survived. Two others who allegedly participated in the hold-up also have been charged, with the three remaining cases making their way through the court system.

Wilson was found guilty by a jury.

In court Tuesday, Riley's older sister, Brooke Riley, made an emotional plea for the maximum sentence. "I'm glad Wisconsin isn't a death penalty state," she told Wilson. "Because death is too good for you. You deserve to suffer everyday for the rest of your days," she said.

According to a picture painted by both the defense and prosecution, Wilson had a tumultuous early childhood. Both of his parents were mixed up with drugs and the criminal justice system. He was sent off to live with a couple of caring grandparents by the age of 5.

Under their rock-solid guidance, Wilson had "moments of promise," according to Kenosha County District Attorney Michael Graveley, But then drugs, alcohol and the wrong set of peers seemed to win out, leading to some minor criminal activity. In his teens and early 20s, Wilson passed through the usual gauntlet of probation, supervision, detentions, drug treatment and counseling, but all failed.

During his comments, Wilson read a statement in which he apologized several times. His attorney said his client was a "good person" who made a tragic mistake.

But it didn't matter. Judge Rossell hinted early on in his remarks that he was planning on constructing a sentence in which rehabilitation wasn't even on the table.

Wilson received the max even though the gun he'd been holding that night never went off, apparently because he didn't realize that a bullet wasn't in the chamber.

All of the shots allegedly came from a gun held by Anthony Harris.