Search Continues For the Gunman Who Killed a Racine Police Officer 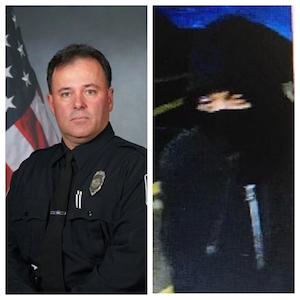 (WGTD)---Video of Monday night's attempted robbery of Teezers Tavern in Racine shows off-duty police officer John Hetland jumping over the bar and struggling with the robber just before he was fatally shot.

'During the course of his attempting to get control of the suspect, there was a little distance gained, and the suspect took the gun and shot Officer Hetland one time," said Kenosha County Sheriff Dave Beth, whose department is conducting the investigation.

Hetland died at the scene while the shooter ran out the back door.

At Tuesday's news conference, held on the steps of Racine's city hall, Mayor Cory Mason asked the public to be especially supportive of the city's police officers who are grappling with their emotions while at the same time trying to solve the crime and in general protect the community. "They're going through a tough time," he said. "The entire City of Racine mourns with them."

The 49-year-old Hetland, the father of two, was by all accounts a well-liked and respected patrol officer with 24 years at the department. He also was active in the union that represents police officers.

WGTD program host Joe Mooney, who retired from RPD 14 years ago, worked with Hetland for a time. The two became friends. "It doesn't surprise me that John would be taking an action like this," Mooney said. "They talk about cops being 24/7 but he truly was. The sad thing is nobody gets to say goodbye to him."

State Senator Van Wanggaard also served for a time with Hetland. "He was always the type of individual who ran toward danger as opposed to away from it,' Wanggaard said. "He will be greatly missed."

The reward for information leading to the arrest and conviction of the suspect is now up to $27,000, including a $20,000 contribution from the FBI and $5,000 from Andis Corp.

Investigators are following up on dozens of leads, said Beth, who predicted that the shooter will eventually be caught.

A grainy security camera image of the suspect has been released. In it, most of the suspect’s face is hidden by a black bandanna. He’s also wearing a navy-blue hooded sweatshirt. According to scanner traffic from Monday night, the suspect is a black man in his 20s standing about about 5-foot-8.

On its  website, the Racine Police Department thanked the community for its outpouring of support.

Hetland had worked Monday's day shift and was off-duty at the time of his death. Even though he had high seniority,  Hetland loved serving on patrol and turned down other opportunities, Mooney said.