Vandalism; Fires in Kenosha as Curfew is Ignored by Many 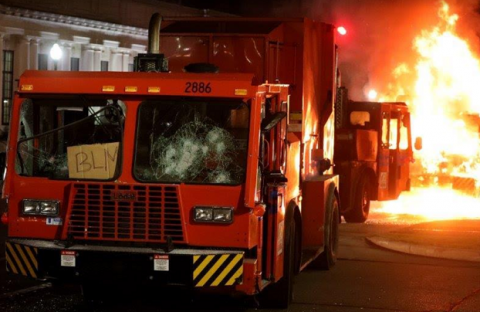 (WGTD)---Several hundred young people, ignoring an overnight curfew prompted by the shooting of a 29-year-old black man Sunday evening, are causing extensive damage in the area of Sheridan Rd. and 56th St.

First, several Public Works Dept. trucks that were used to block streets to the Public Safety Building were set ablaze. Firefighters did not respond.

But just after midnight, firefighters were toned out for a report of flames coming from the courthouse. Video shows flames shooting past a first floor window on the south side west of the main entrance. It's unclear whether any significant damage occurred.

Mobs were said to be smashing windows as they walked east on 56th St.

Looting and damage was reported at several other locations in the city.

The man who was shot, Blake Jacob, is said to be in serious condition at a Milwaukee hospital.

The curfew was declared after a police officer at the scene was knocked out and fell to the ground when he was struck in the head by a rock or brick. A large crowd had gathered after dark.

At least one squad car was damaged. Officers who weren't equipped with riot gear were ordered to leave the scene.

Later in the evening, about 150 people, according to scanner traffic, had gathered in front of the Public Safety Building. Some were said to be throwing rocks.

Gov. Evers issued a statement Sunday night comparing the shooting to George Floyd and Breonna Taylor. "While we do not have all of the details yet, what we know for certain is that he is not the first Black man or person to have been shot or injured or mercilessly killed at the hands of individuals in law enforcement in our state or our country."

Video from the scene of the shooting shows an officer knocked out and falling to the ground by a brick or a rock that had been thrown.

The video of the actual shooting that was posted on social media shows two officers following a man around the front of a SUV as people are screaming in the background. As the man gets in on the driver's side, an officer grabs the man's t-shirt, then appears to shoot him in the back. Seven or eight gunshots ring out. An officer pushes a woman away from the vehicle. Then the clip ends. Neighbors said the man's children were present.

The incident set off an immediate fury in the neighborhood and extra officers and Kenosha County Sheriff's deputies were immediately called to the scene.

It's not known if the man who was shot was armed. That didn't stop TMZ--a national online publication--from running the headline "White Cop Shoots Unarmed Black Man."

A brief news release put out by the police department said officers were originally called to the scene for a domestic incident. Stories at the scene varied--one said the man was trying to break up a fight.

One witness said it appeared one of the officers had tried to 'taze' the man.

Police cordoned off a large area of the street, then silently stood along the yellow tape while groups of people yelled at them.

One woman told a reporter, "The police are trigger happy. Black lives do matter and they need to understand that."

Video of the shooting is below. WARNING: Footage is extremely graphic.

Abortion Test in Racine Could be Coming Up in November