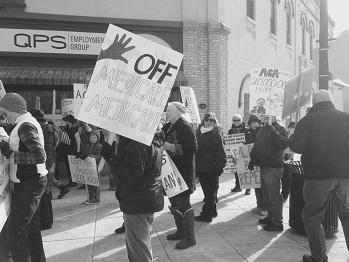 Interest is rapidly growing in a new Kenosha-based political action group whose members appear to be united at least in part through their dislike of Donald Trump.

Gina Walkington is one of four board members for Forward Kenosha, a group made up primarily of progressive-leaning voters. "With every executive order that happens--all these things coming at us--there is a definite uptick in members, which is both exciting to see but also--knowing the cause of this...kind of mixed emotions."

Since the inauguration, the number of Facebook followers has more than doubled from around 400 to well over 800. Walkington says Forward Kenosha is open to everyone, Democrats and Republicans alike, who share the group's values, which  are outlined on the organization's web site.

Forward Kenosha--created shortly after the election-- has already organized demonstrations, established a mission statement and objectives and scheduled monthly meetings.

The next one will be Feb. 15th at the Orbiletti Center at Lincoln Park beginning at 7. A representative of Planned Parenthood will be one of the featured speakers.