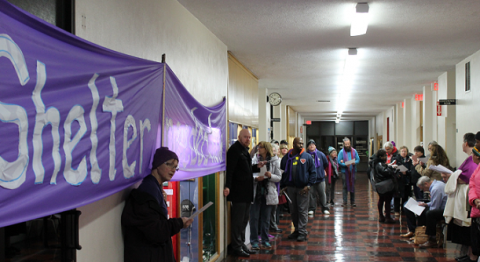 Kenosha---A group that’s been trying to rally support for the creation of a temporary, low-barrier homeless shelter has hit upon an idea: Why not use the old Shalom Center building?

The Rev. Justin Lowe of CUSH---Congregations United to Serve Humanity—says he believes it’s possible. "I think it is--considering that it was used just a few months ago for that same purpose and currently isn't being used," he said. The city owns the building, which is scheduled for demolition.

The Shalom Center recently abandoned the former grade school near the uptown area when it moved into larger and more efficient quarters on 39th Ave. For a variety of reasons, the Shalom Center has balked at taking in homeless people that have either mental health or substance abuse problems.

CUSH has yet to get a final response to its proposal from elected officials.

About 40 CUSH supporters took their call directly to aldermen last night, singing hymns in a hallway outside of council chambers just as the group's regularly-scheduled meeting was about to begin.

Lowe then made CUSH’s case for another shelter in remarks during the citizen comments portion of the meeting.

Lowe estimates that between 15 and 30 homeless people in Kenosha currently have no where to go.

Before the meeting began, Mayor Antaramian told us he believes it’s the responsibility of the county and the Shalom Center to address the problem, although he did acknowledge that he’s been working on it, saying, without being specific, that he’s waiting for more information in regard to a possible solution.

CUSH has been trying to establish a low-barrier shelter ever since a non-profit called First Step was forced to close an overnight warming shelter last spring because of neighbor complaints.