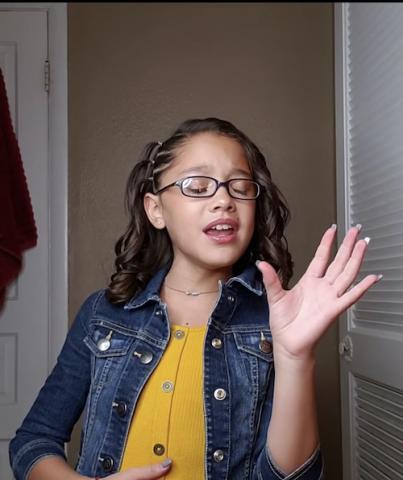 (WGTD) --- 11-year-old Racine Native Liamani Segura was just given a major shoutout by an R&B great and was featured on TMZ's front page Sunday morning among a host of other national outlets.

Segura took part in the “Deborah Cox Challenge,” where singers posted their version of the climax to Cox’s hit song “Nobody’s Supposed to Be Here.” The song went to number two on the Billboard Hot 100 in 1998 and is considered an R&B classic. Grammy award winner Lizzo and Chicago Native Keke Palmer took part. However, in a TMZ interview with Cox, the R&B icon said she was most impressed with Segura's take.

Segura said in a livestream Saturday that she learned the ending of the song in three minutes and then posted the video to Instagram. The video has since been viewed nearly 100,000 times after being shared by “The Shade Room," “BET,” and now “TMZ.” Cox also shared Liamani's version to her own social media.

Segura has been singing since the age of 5 and pre-covid was a favorite of the Milwaukee Brewers and the Milwaukee Bucks to sing the national anthem at home games. Her renditions have garnered millions of views on YouTube. Last week she was named "Best Musician/Band In Racine" in a fan voted award in the Journal Times.