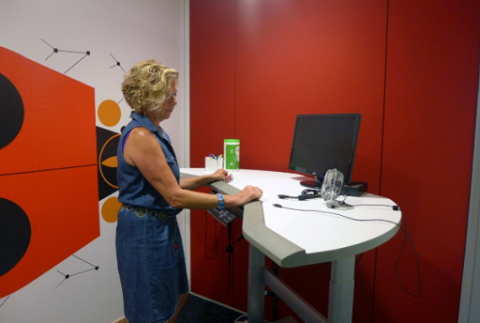 (WPR)---The medical community’s concern about too much sitting has prompted change in the typical office workplace, where many employees have become desk jockeys stuck in one position all day long.

The push to get Americans up and moving means traditional desks and office chairs are increasingly sharing space with adjustable workstations that allow employees to sit and stand. Less common are treadmill desks which sell for between $3,000 and $5,000 depending on their size, said Mindy MacWilliams, executive vice president of the Wisconsin and Illinois region for Atmosphere Commercial Interiors, which furnishes workplaces and is headquartered in Minneapolis.

"It records how many miles you’re doing, what distance, what time, how many calories and what speed you’re going. It’s remarkable what an hour can do and how many steps you can get in," MacWilliams enthused while giving a WPR reporter a tour of the company showroom.

To an outside observer, it can look more like a gym workout than a day at the office. In fact, when adjustable desks first started becoming popular in the 2000s the anticipated health benefits had some touting the alternative office furniture as a way to combat the nation’s obesity epidemic.

Those claims have prompted a number of studies from engineering professors around the country. Data from 53 of these studies was reviewed by the University of Pittsburgh's April Chambers.

Chambers found there may be health benefits to adjustable desks, but weight loss generally isn't one of them.

The researchers looked at how much time workers sat or stood, their performance, physiological changes, discomfort and posture. After analyzing data from the 53 studies, they concluded that sit-stand desks seem most effective for discomfort and least for productivity.

University of Wisconsin-Madison engineering professor Robert Radwin studies workplace ergonomics. He was not involved in the University of Pittsburg study but he instructs students on the qualities of sit-stand desks which he feels have gotten a lot of hype. He does not have one.

"I think they have their place. If people suffer from discomfort from sitting at their desk and they feel standing is beneficial, then such a desk might be helpful but you should be careful not to expect that a sit-stand desk is going to make sedentary work much healthier than if you just got out and exercised," Radwin said.

The unresolved question regarding the health benefits of adjustable desks hasn’t lowered their popularity. The University of Wisconsin Credit Union has 700 employees at 27 locations. And the majority of those workers have access to adjustable desks, according to company officials.

"It’s something that employees are very excited about," LaDonna Steinert, UW Credit Union human resources manager, said. "And as we are looking at expanding and refreshing our existing workplaces and expanding into other workplaces, it’s something we are incorporating into the design because of the positive feedback from our employees," she said.

Another company, American Family Insurance, has seen fewer workers' compensation claims since employees switched to adjustable desks. Over the course of five years, American Family had only 29 injured worker claims compared to the 60 they previously had in the same timeframe, explained American Family spokeswoman Janet Masters in an email.

"They came to us because they were having an extraordinary amount of issues with back problems, with neck problems, headaches all that," recalled recalled MacWilliams. "So we did a pilot for them where we put in the height adjustable desks."

Since the early 2000s, American Family Insurance has had a strategy to bring sit-stand desks to corporate offices as part of a larger effort to foster employee wellness and comply with ergonomic guidance from the federal Occupational Safety and Health Administration. The adjustable desks were not purchased in response to any specific back or neck complaints from employees, Masters said.

When asked if these desks are just a fad, MacWilliams responds fads don’t last this long. And sales, she said, continue to grow as more companies want them and prices drop.

"Two years ago, height adjustable desks were probably three times the cost they are today," MacWilliams said. "Now it's very competitive, everybody’s making them. The industry has just come alive."

With medical studies linking too much sitting with chronic disease and early death, sales of adjustable desks have continued to grow. Still, some researchers like Chambers, caution there’s a lot more research that needs to be done on the merits of such desks.