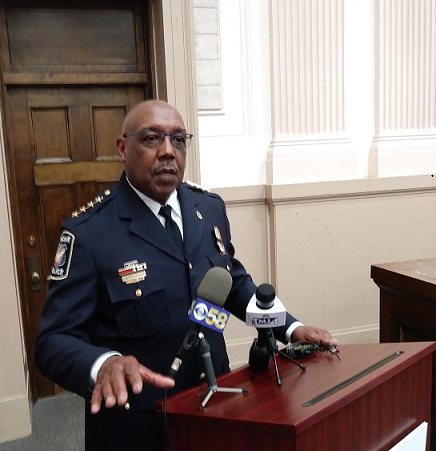 (WGTD)---Racine's new police chief was sworn in Monday amid a continuing shortage of qualified police officers in both Racine and Kenosha.

Maurice Robinson takes over for the retired Art Howell, who despite being retired attended the ceremony. It was held in Racine's City Council chambers with an honor guard and the presence of the department's command staff.

Robinson comes in at a time when the force has 25 sworn-officer vacancies. Kenosha's vacancy rate stands at 21.

The high vacancy rate has been attributed in part to resignations and early retirements brought on by the current climate that surrounds policing.

"We understand that our responsibility is to do more recruiting," Robinson told reporters afterward. "What we're asking people to do is come join us and be the change you want to see," he said.

Meanwhile, the Kenosha Police and Fire Commission will meet in special session Wednesday to consider the possibility of hiring back some officers who recently resigned to work elsewhere. The agenda item is unprecedented.

Samantha Schuirmann, deputy director of Kenosha's human resources department, said a "small" number of officers who left the department within the past year have indicated an interest in returning.

It's not clear why, but Schuirmann said the interest was raised before last month's retirement of Chief Dan Miskinis.

The commission is beginning a search for Miskinis' replacement.