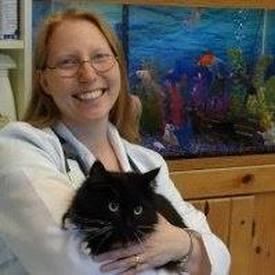 (WGTD)---If you own a pet, consider this, the next time you’re at the vet: The suicide rate for male veterinarians is twice the national average while the rate for female vets is three-and-a-half times the national average. Those numbers are from the Centers for Disease Control and Prevention.

Melanie Goble, who practices in the area in a relief capacity, is a board member of the national suicide prevention group, “Not One More Vet.”

Goble was in the WGTD studios last week to participate long-distance in an Oregon Public Radio program about the problem. Goble says she thinks two things drive the numbers: High student debt and something she calls “compassion fatigue."

Another thing to consider when it comes to vet suicides: Unlike physicians, veterinarians are often called upon or need to euthanize their four-legged patients.

Pet owners, she says, can make a difference. "I cannot tell you how much it makes a difference when someone comes in and says thank you," Goble says. "It changes everything for us."

Goble, a UW-Madison graduate, runs her relief business from her home in Manitowoc.