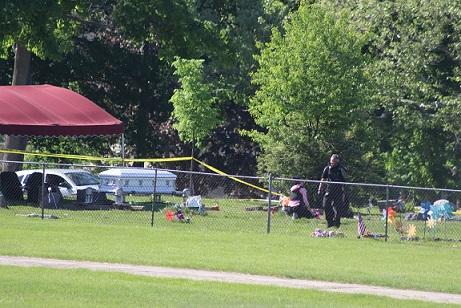 (WGTD)---Two teenagers are facing charges for shooting into a crowd of mourners at the June 2nd burial in Racine for a man who was shot and killed by police.

The oldest of the two, 19-year-old Lamarion Blair, had spent time earlier in the year at a state-run mental health facility for juveniles, and was awaiting trial in a separate case. That case--filed in adult court in 2019--was for possession of a firearm as an adjudicated delinquent and carrying a concealed weapon. At the time of the Graceland Cemetery shooting, Blair had been out of jail after posting a bond in that case, according to online court records.

The second teen to face charges in connection with the cemetery shooting is a 16-year-old boy from Racine.

Two mourners were shot and wounded.

Both Blair and the 16-year-old, according to a news release from Racine Police, are expected to be charged with two counts of Attempted 1st Degree Intentional homicide and 26 counts of endangering safety.

A few days after the shooting, Blair was arrested in Las Vegas on a warrant unrelated to the cemetery shooting, according to records.

Blair and the 16-year-old have yet to be formally charged with the cemetery shooting.