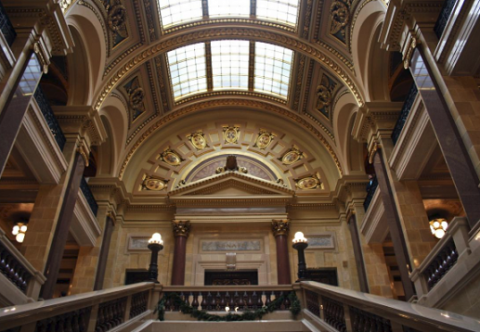 (WPR)---Republicans who run the Wisconsin Legislature plan to send multiple bills to Gov. Scott Walker's desk Tuesday that would weaken the power of Democratic Gov.-elect Tony Evers before he takes office.

They also plan to scale back early voting in Wisconsin and approve more than 80 Walker appointees, some of whom could serve terms that run through the middle of 2023.

Other GOP proposals would scale back the power of Democratic Attorney General-elect Josh Kaul and give the Legislature more power to hire private attorneys for itself instead of relying on the Wisconsin Department of Justice.

The votes in the state Assembly and Senate follow a contentious public hearing Monday evening that stretched into the wee hours of Tuesday morning.

Democrats have argued the proposals are an abuse of power and undermine the democratic process. Speaking with reporters before lawmakers assembled Tuesday afternoon, Rep. Chris Taylor, D-Madison, said liberal lawmakers will do everything in their power to push back on the GOP efforts.

"The people want a government for themselves ... not Republican politicians," Taylor said. "Everything is on the table to stop this pernicious attack on our democracy."

Taylor said that may include lawsuits challenging the constitutionality of the measures, if they become law.

Under the proposed package of bills, Republicans could prevent Evers and Kaul from fulfilling their campaign promise to pull Wisconsin out of a multi-state lawsuit to overturn the Affordable Care Act. Under current law, Kaul could do so with Evers' approval. Under the bill up for a vote Tuesday, approval to withdraw would have to come from the Legislature's budget committee, rather than the governor, where Republicans hold a 12-4 majority.

Speaking to reporters before the start of the Legislature's action Tuesday, Kaul said Republicans were trying to overturn the will of voters.

"I heard lots and lots of people talking on the campaign about how they believe in … keeping in place protections for people with pre-existing conditions," Kaul said. "But this action is fundamentally inconsistent with that because this is going to make it in all likelihood impossible for the state of Wisconsin to withdraw from that lawsuit if this legislation moves forward."

While it's not altogether unusual for a legislature to hold a lame duck session, the nonpartisan Legislative Reference Bureau said this was the first time in state history that an extraordinary session had been used to reduce the power of an incoming governor and attorney general.

Many of the changes to Evers' power involve rulemaking, giving the Legislature more power over a process that Republicans had concentrated in the hands of Gov. Scott Walker over the past eight years. Other changes would prevent Evers from withdrawing from Walker proposals to require childless adults to work in order to receive Medicaid or benefits like food stamps.

But the constraints on Evers would stretch well beyond that.

One would give majority lawmakers a majority of appointments on the Wisconsin Economic Development Corp. board and let that board pick the next WEDC CEO.

Eight former leaders of the state's economic development agency who served under both Republicans and Democrats said they're against changes proposed in the lame-duck session.

Under the proposals, Evers would also lose the power to make key appointments early in his tenure.

Among the list of appointments the Senate was scheduled to confirm Tuesday include Ellen Nowak for a seat on the Public Service Commission and high-profile attorney Scott Beightol for the University of Wisconsin System Board of Regents. Nowak is a former PSC commissioner who went on to become Walker's Secretary of the Department of Administration. Their terms would end in mid-2023, meaning they could outlast Evers' tenure as governor depending on whether he successfully seeks re-election.

Other provisions were more specific in nature. For example, Evers would be barred from unilaterally making the state capitol a gun-free zone.

There's no guarantee that all the bills will pass. A contentious plan to move Wisconsin's presidential primary in 2020 could face an uphill climb after it failed to pass the Legislature's budget committee early Tuesday morning, when the budget committee also voted along party lines to approve the wide-ranging plans that would restrict early voting and limit Evers and Kaul's power.