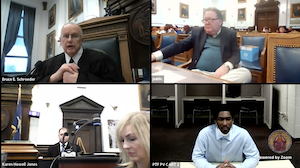 WGTD)---Kenosha Court Judge Bruce Schroeder is having a time of it in presiding over the trial of Rakayo Vinson, the 25-year-old Kenosha man who allegedly killed three men and wounded three others at a packed tavern in Somers last spring.

Vinson renewed his request Thursday morning for a new attorney. The prosecution views the move as a delaying tactic.

While he has fired Bielski, Vinson is refusing to represent himself, even with a court-appointed ‘stand-by’ attorney present. Vinson appears to be mostly upset at matters pertaining to the admissibility of some evidence.

While tempers were kept mostly in check Thursday morning, the courtroom discussion between Schroeder and Vinson included numerous times in which Schroeder told Vinson not to interrupt.

Eventually, Schroeder took the highly unusual step of ordering Vinson back to the jail where he was allowed to watch his trial unfold via Zoom. As he was escorted through the front of the courtroom because a back exit wasn't available, audience members, friends and relatives of the victims, stood up and started shouting at Vinson. Deputies rushed over to restore order.

Back in the jail, Vinson was also given the ability to interject remotely with any objections and conduct cross examinations. Even that didn’t work.

But then the proceeding was sidetracked again when Schroeder became aware that a member of the audience was live-streaming portions of the trial—something that’s clearly against court rules that include a ban on cell phone usage altogether.

The audience member was brought to the front of the court where she was found in contempt and immediately sentenced to 10 days in jail.

On Tuesday, as the trial was getting underway, another audience member was fined $250 for yelling something as she stormed out of the courtroom.