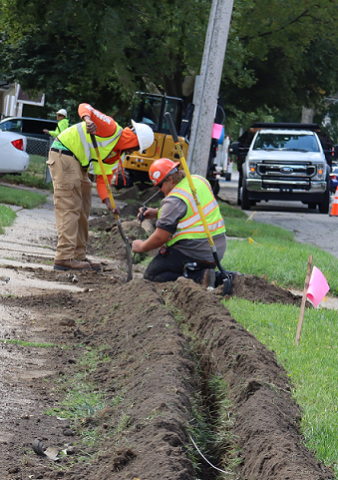 (WGTD)---In the City of Kenosha, Spectrum and AT&T will soon have some competition.

Within three years, homes and businesses that are connected to the internet via those companies will have a wider choice of providers, thanks to a $100 million project to install underground fiber in front of each home and business in the city. Crews have already begun to bury fiber in the Lincoln Park neighborhood.

The formal launch was held Thursday in a ceremony that took place in Lincoln Park.

At no cost to taxpayers, the city has an agreement with a company called SiFi Networks. Spokesman Marcus Bowman said ScFi’s first responsibility is to get the cable in the ground, and then contract with providers that’ll be able to offer top-of-the-line connection speeds. "Our primary goal is making sure the fiber goes throughout the city as planned," he said. "Then when the internet providers come on board we say--hey--the customers are all lined up now and it's on you to bring them in."

Neighborhoods will be brought on line in phases, but the entire project is expected to be completed within three years.

That means that in the coming months Kenosha residents will be the targets of marketing campaigns from various providers looking for their business, and will be faced with some decisions. Providers on SiFi Networks—branded in Kenosha as Kenosha FiberCity—are expected to be able to offer competitive prices, reducing the "digital divide" between income levels.

The network will also enable Kenosha to take advantage of smart city applications.

More information is available on Facebook under Kenosha FiberCity.