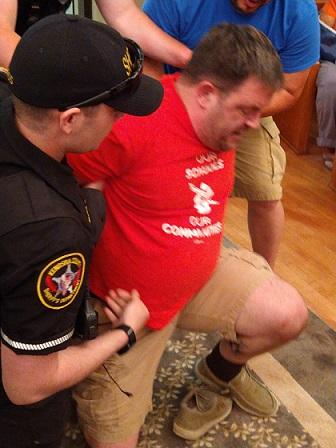 (WGTD)---Tuesday night's Kenosha County Board meeting ended early in chaos after Board Chair Gabe Nudo ruled a citizens' comments speaker out of order and the man refused to give up the podium. Two sheriff's deputies who routinely are assigned to the meetings moved in and wrestled the man to the ground before hauling him off.

Online records show that 43-year-old Joel Trudell was being booked into the county jail Tuesday night on charges of disorderly conduct and obstructing.

Trudell was part of a contingent that showed up to mostly speak against a proposal to allow permit holders to carry weapons into most county buildings.

Trudell, however, used his time to call out four supervisors by name for accepting campaign cash in the last election cycle from the Republican Party. The election resulted in a much more conservative county board, which is technically supposed to be non-partisan.

The spark that ignited Tuesday night's chaos came from somebody in the audience who yelled something while Trudell was speaking.  A moment later, a man--possibly the shouter--got up from the front row and walked past Trudell on his way out of the chambers.

At that point, Trudell paused, then remarked, "I guess it's a good thing we weren't concealed carry. I could've taken that as a threat, huh?"

Nudo then said "That was uncalled for." Trudell responded, "Well it's the truth."

Trudell and Nudo began talking over each other and seconds later Nudo called for Trudell's removal.

As the two deputies, with help from a couple of audience members, tried to make the arrest, Trudell yelled "I'm trying to talk. What is going on here?"

Two minutes after the fracas began, Supervisor Terry Rose made a motion to adjourn. The motion passed by a single vote and the meeting was over.

Reinforcements from the Kenosha Police Dept. appeared in the chambers. Both sheriff and police department squad cars and motorcycle units with red lights activated flooded the street outside of the administration building.

The board Tuesday night was to have voted on the carry concealed proposal. It wasn't immediately clear when the board will meet next.