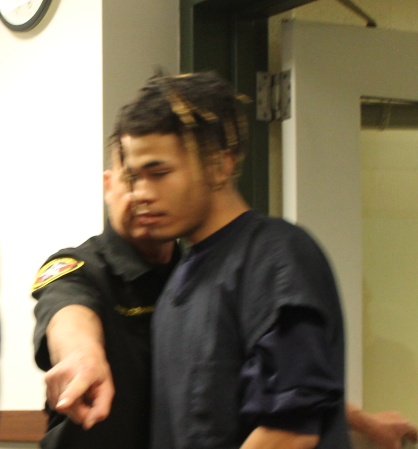 (Editor's note: KPD news releases on the shootings consistently noted Kaylie Juga's age as 16. Based on her DOB cited in the criminal complaint issued Monday, Kaylie was 15 at the time of her death. We will make all copy conform.)

What we learned Monday in the Juga family shootings from the criminal complaint and in court:

*Family, friends, coworkers and school officials were apparently concerned about the 15-year-old Kaylie's safety. Ex-boyfriend Martice Fuller had been expelled from Bradford High School for threatening behavior that had been directed toward Kaylie.

*Kaylie was shot first Thursday afternoon as she was in her bedroom listening to music.

*Her mother, who'd been in a bathroom, first became aware of trouble when she heard a "blood curdling" scream, followed by a bang and another scream.

*Stephanie Juga walked toward her daughter's room and confronted Fuller as he was standing in the doorway. When Fuller pointed a gun at her, Mrs. Juga reportedly said, "You don't have to do this" to which the defendant replied, "Yes, I have to." Mrs. Juga was shot in the left arm and wrist as she tried to close the door. Fuller reportedly kicked it open then shot the 39-year-old woman in the chest. Mrs. Juga retreated to the bathroom, locked the door and called 911. Mrs. Juga remains hospitalized.

*Fuller, according to a cousin quoted in the criminal complaint, had "only" intended to shoot Kaylie twice, but "freaked' when she started to scream. An autopsy determined that Kaylie died from four gunshot wounds to the chest and one to the head.

*The shooting was premediated, according to Kenosha County District Attorney Michael Graveley, who said it appeared Fuller had stashed some fresh clothes in the woods near the Juga home and changed into them after the shooting.

*Fuller lied about his whereabouts the afternoon of the shooting in a story that was intially backed up by his mother.

*Fuller is being held on a $1 million bond. The defense is expected to file what's called a "reverse" waiver to get the case heard in juvenile court. Fuller does not have a juvenile record, according to his attorney.