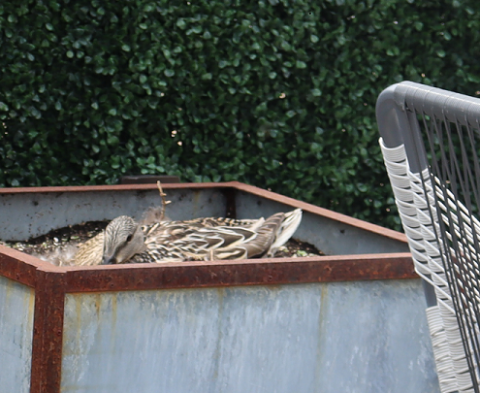 (WGTD)---It’s been a rough couple of years for restaurants and bars, what with COVID and the labor shortage. At the Stella Hotel and Ballroom in downtown Kenosha, a new problem has surfaced---or should we say landed.

Sometime earlier this spring, a federally-protected Mallard duck took up residence in a planter in the hotel’s open-air rooftop bar and laid some eggs.

With the duck sitting contently on her eggs, the hotel is planning to open the roof-top bar for the season as scheduled Friday night. Hotel manager Angela Cleveland says the area where the nest is located will be cordoned off. "We're going to see how it goes this weekend," she said. "We're keeping our fingers crossed that everyone can cohabitate peacefully."

The hotel is also keeping an eye on two of the duck’s male friends that are hanging out on the ground around the hotel. "They just walk around the property. It's like neighborhood watch for ducks," jokes building engineer Tyler Townsend.

The hotel expects the eggs to hatch in the next few days. They’re seeking professional advice on what to do next.

In consideration of its unusual guest, the duck entrée is off the menu in Stella's restaurant, called "The 1844 Table & Mash." "We are not going to give anyone the wrong idea on that," Cleveland says with a straight face.