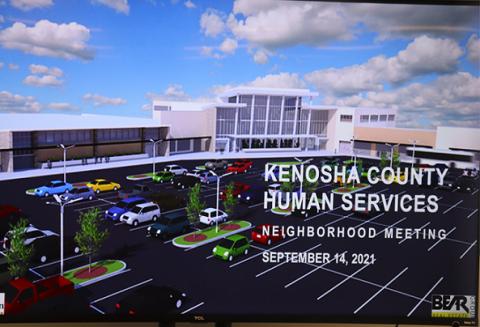 (WGTD)---No major concerns were raised at a public meeting Tuesday evening on a proposal to move Kenosha County's Job Center on Sheridan Road to a new campus on 52nd St. And the County Board Supervisor whose district includes the proposed site says he believes it's the leading option among his colleagues.

Bear Development is proposing to house the county's human services in the Sun Plaza retail center that it owns. The county offices would be housed in a combination of renovated, existing space and in new construction. A main feature of the complex would be a two-story atrium. Existing tenants would be moved to new structures on the 13-acre site, according to S.R. Mills, President of Bear Real Estate.

County Supervisor Andy Berg views the proposal as a great example of a public/private partnership. "What S.R. and Bear has done is they've taken this on themselves and brought it to us. We haven't paid for any of this to be done. Nobody else has approached us," he said.

Construction costs are estimated to run between $13 and $16 million. The financial component has yet to be worked out, but Mills envisions that the campus would eventually be owned outright by the county.

The existing Job Center on Sheridan Rd. is in need of expensive repairs and expansion. Bear has offered to take over the property, demolish the building and find a new use for the land.

Mills conceded that Sun Plaza isn't in the greatest shape, either. But bringing in the county offices would allow for overall improvements to be made that would benefit the entire neighborhood and lead to new businesses, he said.

The relocation plan is expected to be discussed during county budget hearings this fall.