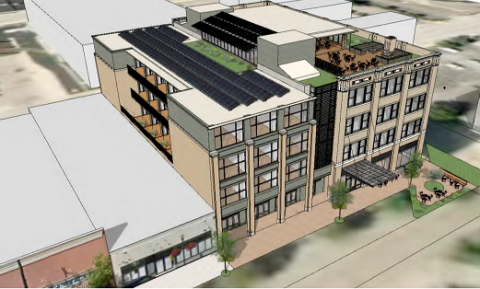 (WGTD)---A new use has been found for a long-vacant, downtown Racine landmark.

The former Zahn's Dept. Store off of Monument Square will soon become an 80-room boutique hotel, complete with a 1st floor food and beverage center and a partially-enclosed, year-round rooftop bar.

Christopher Adams, co-owner of Milwaukee-based Dominion Properties,  joined Mayor Cory Mason and Jeff Coe, the alderman of the area, in a late-morning announcement in the mayor's office. "I'm really excited," said Mason. "People have talked fondly about their memories of Zahn's for a long time but have wondered for a long time what its future use might be," he said. The 95-year-old building has sat idle for 38 years.

Mason said he's particularly happy that the developers have embraced an environmentally-conscious approach. The building will include solar panels, a wind turbine and geo-thermal technology. Guest rooms will have 'smart' controls.

The financing package has been secured for the $29 million project, said Adams. Financial incentives from the city include nearly $2 million from tax incremental financing district reserves for site improvements and a $4 million loan. In addition, the developer will be able pocket 25% of all room tax revenues for ten years at a not-to-exceed total of $608,000. The incentives are subject to city council approval.

Adams said he envisions that the hotel will become a gathering place for Racine residents in addition to out-of-town travelers. There'll be banquet facilities large enough to accommodate 180 people and an oversized lobby with a fireplace. "We're calling it Racine's living room," he said.

The conversion is expected to be completed by summer of 2021.