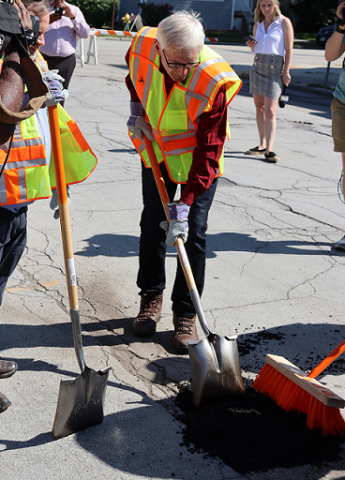 (WGTD)---Gov. Evers spent some time in Racine Tuesday, filling potholes with Mayor Cory Mason as part of his “Pothole Patrol” tour to emphasize the importance of transportation infrastructure.

With Racine public works employees assisting, Evers and Mason threw asphalt in potholes near Frat Elementary then tamped down the material.

The Evers Administration is taking credit for improving more than 46-hundred miles of highways and roads, including more than 17-hundred miles of locally-owned roads across the state. Evers says we still haven’t caught up. "Absolutely not," he said. "We're going to continue to put pressure on the legislature to provide the money, and also as I said before the Biden money is going to be very helpful to us." The latter was a reference to President Biden's infrastructure repair bill that passed Congress.

On another topic in a short conversation with reporters,  Evers reiterated that he won’t be commenting on whether he would support construction of the Menominee tribe’s, proposed Hard Rock casino and hotel complex for Kenosha. He says it might take years before the proposal gets through the layers of local and federal review.