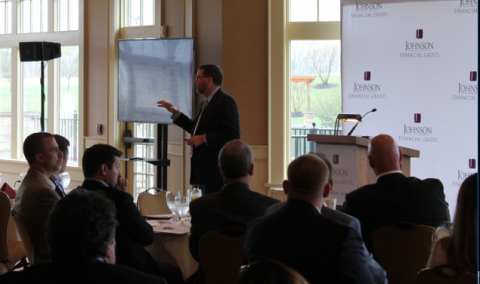 A bit of insight into Foxconn’s decision to move some L-C-D production to the U-S and Mt. Pleasant in particular came at a breakfast briefing in Kenosha Thursday from Johnson Financial’s Chief Investment Officer.

Brian Andrew noted that the notion of manufacturing costs being a lot less in China than in the U-S is no longer true. He says China has been getting more expensive for producers as workers demand higher pay and better working conditions. Also, China finds itself having to catch up to address air and water quality issues. In addition, transportation costs are growing, and energy prices remain high.

"That all raises the cost of production," Andrew said. "It starts to put us on more of an even footing."

Foxconn’s planned L-C-D plant for Mt. Pleasant will be the first of its kind in the U-S.

Thursday's overview on investing conditions and the economy in general took place at the Strawberry Creek club house.

On other topics…Andrew said he’s not as worried about the prospect of runaway inflation as some other analysts. He cited several factors, including downward pressure on wages brought about by lower-paid millennials taking over for higher-paid baby boomers as they retire. "Literally every day somebody will write a story about runaway inflation and that interest rates are going up to 6% in the next two months. That's not our view."