Gay Pastor Reconciles with Kenosha Church That Fired Him 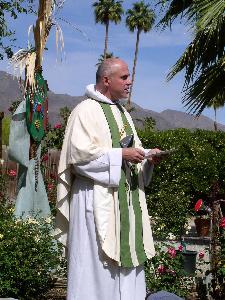 In a move of reconciliation---and to clear up a quasi-mystery---the First United Methodist Church---in Kenosha---is welcoming back a pastor who was fired 35 years ago because he was gay. While the United Methodist Church embraces gay members---it prohibits gay clergy. After being outed as gay by a parishioner---Reverend Kevin Johnson (pictured) was asked to leave. Johnson---known as RevKev---later went on to co-found the Bloom in the Desert Ministries in Palm Springs, California in 2002. The 63-year-old Johnson is thrilled with the invitation of the church’s leaders and parishioners.

First United Methodist---which is on the corner of 60th Street and Sheridan Road in Kenosha has two church-related events planned with RevKev. On Saturday, February 4th at 2pm he will give an interactive talk titled “Keeping The Faith.”  It will be the story of his journey following his sudden dismissal from the Kenosha church in 1982 to the founding of his new ministry in 2002. It will be followed by a question-and-answer session and a reception. Then---Richardson will preach at the 10:30 service---at the church---on Sunday, February 5th.

Because he wanted to marry his partner, Reverend Johnson left the Methodist Church and joined the United Church of Christ.

Clergy from other Kenosha churches are being invited---and---the public is welcome to attend both events.