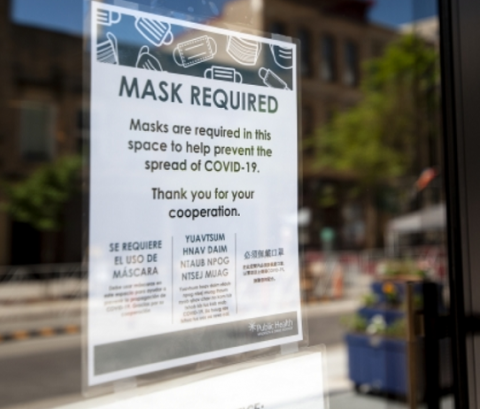 (WPR)---Gov. Tony Evers issued a statewide mask mandate in Wisconsin on Thursday afternoon in an effort to slow the spread of the coronavirus, likely setting off a partisan battle about whether he has the legal authority to issue such an order.

The order will go into effect on Aug. 1 and is set to expire on Sept. 28. It will require people five-years-old and older to wear masks in indoor or "enclosed" public places when people who don't live with them are present.

Those public places include indoor and outdoor bars and restaurants, stores, outdoor park structures and public transit. People who don't follow the mandate could be fined up to $200.

Evers issued the order after weeks of speculation about whether he would take the step — and how long any such mandate would stand before being challenged in court.

The head of a conservative advocacy group that has brought a number of legal challenges against the governor has argued there's no legal justification for Evers issuing a new emergency declaration.

"One cannot simply extend those emergency powers in series," said Rick Esenberg, president and general counsel for the conservative Wisconsin Institute for Law and Liberty, in an interview with WPR earlier this month. "We can't simply redeclare the emergency over and over again if it is essentially seen as part of the same problem."

A legal challenge to the governor’s action would ultimately be decided by the state Supreme Court, which is about to undergo a shift in its partisan makeup. Liberal Justice-elect Jill Karofsky is set to take her seat on the court this Saturday, replacing conservative Justice Daniel Kelly. When Karofsky joins the court, its conservative majority narrows to 4-3.

Some speculate conservative Justice Brian Hagedorn, who sided with liberals in the court’s May decision on the Evers administration’s stay-at-home order, could provide a deciding vote to uphold the governor’s mask order.

However, Hagedorn’s opinion in May related to a technical element of the stay-at-home case, rather than constitutional arguments. A different approach in a mask case could realign him with his fellow conservative justices.

The mask order includes some exceptions.

People will not be required to wear a mask if they are participating in a number of activities, including eating, swimming or communicating with someone who is deaf or hard of hearing and communication "cannot be achieved through other means." People with medical conditions, intellectual or developmental disabilities or other sensory sensitivities that prevent them from wearing a face covering are also exempt.

Facilities under the control of the state Legislature, like the state Capitol Building, and the state Supreme Court, are also exempt.

People are discouraged from using N95 masks to comply with the order, so those masks remain available for medical professionals in Wisconsin. Face coverings as defined in the order can include "bandana, a cloth face mask, a disposable or paper mask, a neck gaiter, or a religious face covering." Plastic face shields do not qualify.

While Democrats have urged Evers to issue a statewide mask order, Wisconsin Republicans have long been critical of statewide restrictions. The GOP lawmakers who control the state Legislature have spoken out against a mask mandate and argued restrictions related to coronavirus should be left to local governments. A patchwork of mask mandates and other restrictions exist across Wisconsin.

The governor’s order puts Wisconsin in line with other Midwestern states. The Democratic governors of Illinois, Michigan and Minnesota have already issued mandates, as have the Republican governors of Indiana and Ohio.

Cases of COVID-19 continue to spread in Wisconsin. In new county-level data released Wednesday, the state reported 61 of its 72 counties now have high COVID-19 activity.