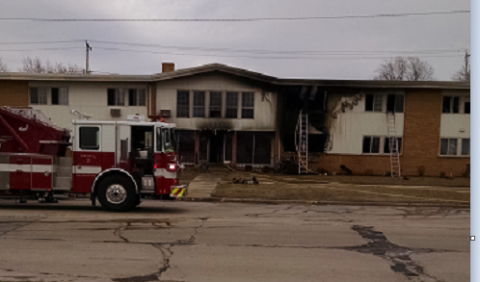 Kenosha---About 30 tenants had to find alternative shelter Saturday after a fire heavily damaged their south side apartment building.

Four residents, including a three year-old child, suffered smoke inhalation and were taken to the hospital.

Some residents were trapped in second floor apartments and had to be rescued through windows by firefighters using ladders.

Two apartments, including the unit where the fire is believed to have started, sustained significant structural damage while the rest had extensive smoke and water damage, according to Batallion Chief Ken Schroeder Saturday night. The cause of the fire remains under investigation.

Although it appeared to be up to code, the building was not sprinklered, according to Schroeder.

The Red Cross was called in. Nearby Jane Vernon Elementary was opened temporarily Saturday afternoon to afford shelter to displaced tenants.