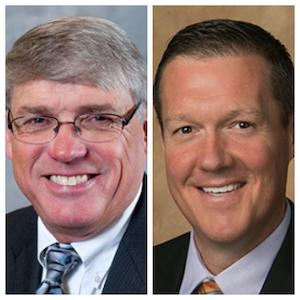 (WGTD)---Two executives from outside of city hall are being brought in to fill a couple of top positions in Kenosha's Municipal Building.

Timothy Casey, who currently serves as Director of Economic Development for the Waukesha County Center for Growth, has been appointed by Mayor John Antaramian to the position of Director of City Development. Matt Krauter has been appointed City Clerk-Treasurer. Krauter has 20 years of experience in the financial industry, last having served as a senior vice-president for Blackhawk Community Credit Union.

Both will replace long-time city employees who recently retired.

The City Council is expected to confirm both appointments at its regularly-scheduled meeting Monday night.

Casey's resume includes a variety of economic development positions in both the public and private sector, including stints for the City of Brookfield and Milwaukee County, where he was said to be instrumental in developing the Milwaukee County Research Park and Technology Incubator. One of Mayor Antaramian's top priorities is developing the former Chrysler Engine Plant site as an innovation center.

Both men are expected to slide into their new jobs at the end of the month.