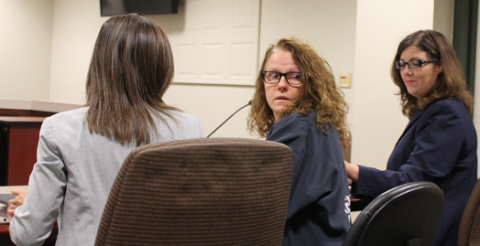 Kenosha---The woman accused of killing her ex-boyfriend because she purportedly feared for her life started to tremble and cry as the case against her unfolded in Kenosha Court Tuesday morning.

50 year-old Donna Matthews is accused of entering Michael Gayan’s home the evening of July 4th, lying in wait for his return, then surprising him with a gun as he settled into a leather chair. At least that’s the story that Matthews purportedly conveyed to her brother, Derrick, who allegedly was in on the planning but not present for the killing.

Derrick Matthews’ story, as told to investigators, was relayed in court Tuesday by Police Dept. Det. Vicente Correa. As Correa began to testify, Donna Matthews' hand began to tremble and one of her attorneys handed her a tissue.

Upon entering the courtroom Tuesday morning, Matthews, wearing a jail jump suit, waived to friends and family in the gallery.

Donna Matthews’ attorneys are expected to argue that their client felt she had no choice but to shoot Gayan after he allegedly made threats against her and her family and started following her, literally, across the country.

In recent months, Matthews received two restraining orders against Gayan, including one in Hawaii which he allegedly violated.

Donna Matthews is expected to appear in court again on Friday, this time with her brother, for arraignment.  Both are facing identical charges of 1st Degree Intentional Homicide.