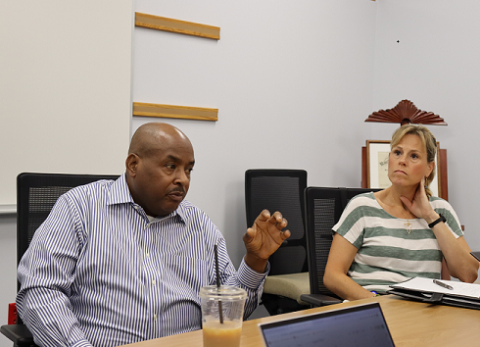 (WGTD)---It’s been over two years since voters in the Racine Unified School District narrowly approved a nearly billion dollar downsizing and modernization plan.

While a dozen projects are currently underway, some pieces of the plan have yet to be nailed down. Foxconn downsizing, a continual decline in the birth rate and delays caused by the unsuccessful Supreme Court challenge of the results of the referendum are to blame.

Administration briefed school board members this past week on where things stand.

School Superintendent Eric Gallien said part of the middle school plan remains in flux. He said it’s particularly important to get that piece right because that’s where enrollment declines occur, and where the district currently has what he termed a “perception” problem.

Under consideration, according to Chief Operations Officer Peter Reynolds, is adding middle school grades to Olympia Brown Elementary on the north side, while continuing to develop plans to serve the south west part of the district by adding a middle school to Schulte Elementary, or, in the alternative, at a new site in either Mt. Pleasant or Sturtevant.

District spokesperson Stacy Tapp later clarified the picture. The original plan, she said, calls for two new middle schools to be built--one on the north side and the other on the south side--to help reduce middle school enrollment at Jerstad-Agerholm and Mitchell K-8 schools. "We are currently reviewing a concept that would alternatively offer more K-8 options without building two new middle schools," she said.

No matter what, renovation and expansion projects at the K-through-8 Jerstad-Agerholm and Starbuck schools will be completed in time for the start of the 2024-25 school year.