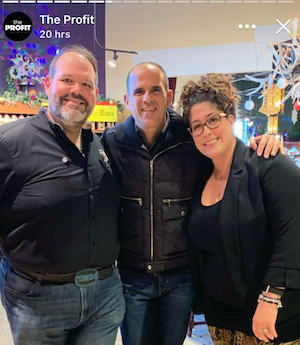 (WGTD)---Marcus Lemonis travels across the country investing in small businesses that are in dire straits on the hit CNBC reality show “The Profit.”  When local fans of the show saw a photo of Tyson Wehrmeister and Natalie Brossard of Mars Cheese Castle with Lemonis (shown in the center of the photo) on social media, many were alarmed.

Lemonis has other area connections as well. He is CEO and co-owner of Camping World and Gander Outdoors, including the location in Kenosha. Lemonis and private equity group Crestview Partners purchased Gander Mountain in 2017 for $35 million. Lemonis graduated from Marquette University in 1991. His net-worth is $900 Million. In 2013, Lemonis launched “The Profit.”

“The Profit” airs Tuesday nights on CNBC at 9pm.

The episode that showcases Mars Cheese Castle will air this upcoming January.